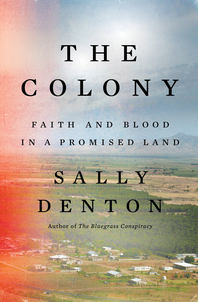 A shocking massacre in 2019 sparks a probing investigation into the strange, violent history of a polygamist Mormon outpost in Mexico

A harmless, unassuming caravan of women and children was ambushed by masked gunmen in northern Mexico on 4 November 2019. In a massacre that produced international headlines, nine people were killed and five others gravely injured. The victims were members of the La Mora and LeBarón communities—fundamentalist Mormons whose forebears broke from the Church of Jesus Christ of Latter-day Saints and settled in Mexico when polygamy was outlawed.

In The Colony, the best-selling investigative journalist Sally Denton picks up where initial reporting on the killings left off, and in the process tells the violent history of the LeBarón clan and their homestead, from the first polygamist emigration to Mexico in the 1880s to the LeBaróns’ internal blood feud in the 1970s to the family’s recent alliance with the NXIVM sex cult. Drawing on sources within Colonia LeBarón itself, Denton creates a mesmerising work of investigative journalism in the tradition of Under the Banner of Heaven and Going Clear.