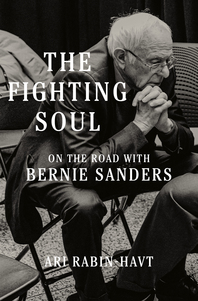 An intimate account of Bernie Sanders as we have never seen him before, revealing the man behind the enigmatic progressive icon

Bernie Sanders is one of the most influential figures of our time, a politician who inspires fervent love and, even among his enemies, a measure of grudging respect—yet we know comparatively little about this famously private left-wing firebrand. Now, Ari Rabin-Havt, a trusted Sanders aide, is able to take us where no press features or televised interviews have been able to go.

The Fighting Soul is a behind-the-scenes chronicle of Sanders’s meteoric 2020 campaign for president—from the first campaign meeting in Rabin-Havt’s living room, to Sanders’s heart attack and the end of the campaign as the COVID-19 pandemic spread around the world—that deepens into an unforgettable portrait of Sanders. Rabin-Havt unfolds the history that drives his deep ideological commitments to the working class, his views of his young supporters, his sense of humour, which few outside his immediate circle ever witness, and the role his wife, Jane, plays in his success. In the tradition of What It Takes and other exuberant works of American political writing, The Fighting Soul shows the making of the rare politician motivated by principle, not power.