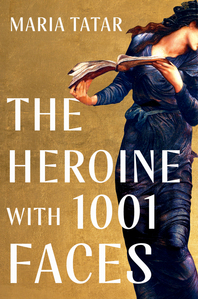 World-renowned folklorist Maria Tatar reveals an astonishing but long buried history of heroines, taking us from Cassandra and Scheherazade to Nancy Drew and Wonder Woman.

How do we explain our newfound cultural investment in empathy and social justice? For decades, Joseph Campbell had defined our cultural aspirations in The Hero with a Thousand Faces, emphasising the value of seeking glory and earning immortality. His work became the playbook for Hollywood, with its many male-centric quest narratives.

Unsatisfied with Campbell’s once-canonical work, Maria Tatar explores how heroines, rarely wielding a sword and deprived of a pen, have flown beneath the radar even as they have been bent on social missions. Using the domestic arts and storytelling skills, they have displayed audacity, curiosity and care as they struggled to survive and change the reigning culture. Animating figures from Ovid’s Philomela, her tongue severed yet still weaving a tale about sexual assault, to Stieg Larsson’s Lisbeth Salander, a high-tech wizard seeking justice for victims of a serial killer, The Heroine with 1,001 Faces creates a luminous arc that takes us from ancient times to the present.

"Our ur-narratives, Tatar shows, return again and again to the abuse and silencing of women, and the heroines she selects in myths, fairy tales, novels, television series, news stories and films use storytelling to ‘rescue, restore, or fix things’. Starting with Philomela, who was raped and had her tongue cut out, Tatar reminds us that contemporary Philomelas are everywhere, only today we cut out their tongues with confidentiality agreements and by creating situations, as Ronan Farrow said of Harvey Weinstein, in which a woman’s silence will benefit her more than speaking out ever could." — Frances Wilson, Literary Review