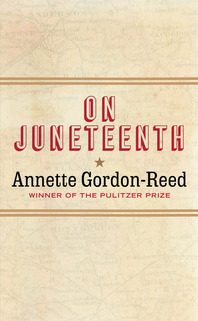 The mesmerising story of Juneteenth’s integral importance to American history—told by a Pulitzer Prize–winning historian.

Interweaving American history, dramatic family chronicle and searing episodes of memoir, On Juneteenth recounts the origins of the holiday that celebrates the emancipation of those who had been enslaved in the United States. A descendant of enslaved people brought to Texas in the 1850s, Annette Gordon-Reed, explores the legacies of the holiday.

From the earliest presence of black people in Texas—in the 1500s, well before enslaved Africans arrived in Jamestown—to the day in Galveston on 19 June 1865, when General Gordon Granger announced the end of slavery, Gordon-Reed’s insightful and inspiring essays present the saga of a “frontier” peopled by Native Americans, Anglos, Tejanos and Blacks that became a slaveholder’s republic. Reworking the “Alamo” framework, Gordon-Reed shows that the slave-and race-based economy not only defined this fractious era of Texas independence, but precipitated the Mexican-American War and the resulting Civil War. A commemoration of Juneteenth and the fraught legacies of slavery that still persist, On Juneteenth is a stark reminder that the fight for equality is on-going.

"If this book is a departure for [Gordon-Reed], it’s still guided by the humane skepticism that has animated her previous work. In a series of short, moving essays, she explores ‘the long road’ to June 19, 1865, when Maj. Gen. Gordon Granger announced the end of legalized slavery in Texas, the state where Gordon-Reed was born and raised… No matter what she’s looking at, Gordon-Reed pries open this space between the abstract and particular… Gordon-Reed acknowledges that origin stories matter, even if they often have more to say about “our current needs and desires” than with the facts of history, which are often stranger and less assimilable than any self-serving mythology will allow… One of the things that makes this slender book stand out is Gordon-Reed’s ability to combine clarity with subtlety, elegantly carving a path between competing positions, instead of doing as too many of us do in this age of hepped-up social-media provocations by simply reacting to them. In ‘On Juneteenth’ she leads by example, revisiting her own experiences, questioning her own assumptions — and showing that historical understanding is a process, not an end point." — Jennifer Szalai, The New York Times

"'The Education of Henry Adams’ is the second most influential memoir in American letters, after Benjamin Franklin’s autobiography. Annette Gordon-Reed’s insightful, often touching reflection on the Black experience in Texas, starting with her own, lands between these two." — H.W. Brands, The New York Times Book Review

"Juneteenth was a day long-celebrated by many Black communities in Texas and across America, but only in the past year or two has it become a more widely recognized holiday. In her slim but potent book, Pulitzer Prize- and National Book Award-winning historian and Harvard professor Annette Gordon-Reed explores the story of that day and all the ways that Black and Native people’s lives have been obscured in culture. As a Texas native, Gordon-Reed offers a book that is both profound and personal in its exploration of the ways history shapes our lives and becomes distorted and reinvigorated over time.
" — The Best Books of 2021 So Far, TIME Magazine

"... Gordon-Reed offers a timely history lesson. She does so with beautiful prose, breathtaking stories and painful memories. Like the story of Juneteenth itself, the history she tells is one of yarns woven, dark truths glossed over and freedom delayed." — Daina Ramey Berry, The Washington Post

"... Gordon-Reed is the textbook definition of public intellectual; and yet she gets personal in this slender, evocative memoir, blending gorgeous details from her small-town Texas girlhood with the unofficial celebration of slavery’s demise and the broader canvas of race in America..." — 20 of the Best Books to Pick Up This May, Oprah Daily

"In a book that is part memoir, part history, Gordon-Reed (who won a Pulitzer Prize in 2009 for “The Hemingses of Monticello”) recounts her continuing affection for her home state of Texas, despite its reputation for violence and racism, writing that ‘the things that happened there couldn’t have happened in other places." — 100 Notable Books of 2021, The New York Times