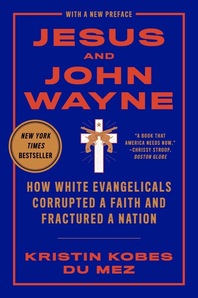 “It is impossible to do justice to the richness of Jesus and John Wayne”—Chrissy Stroop, The Boston Globe

In Jesus and John Wayne, a seventy-five-year history of American evangelicalism, Kristin Kobes Du Mez demolishes the myth that white evangelicals “held their noses” in voting for Donald Trump. Revealing the role of popular culture in evangelicalism, Du Mez shows how evangelicals have worked for decades to replace the Jesus of the Gospels with an idol of rugged masculinity and Christian nationalism in the mould of Ronald Reagan, Mel Gibson and above all, John Wayne. As Du Mez observes, the beliefs at the heart of white evangelicalism today preceded Trump and will outlast him.

"Kristin Kobes Du Mez takes on [the Religious Right’s] version of toxic masculinity in her book Jesus and John Wayne: How White Evangelicals Corrupted a Faith and Fractured a Nation… Du Mez writes from the inside. She was raised in the Christian Reformed Church, a splinter sect of the Dutch Reformed Church." — Anne Nelson, Times Literary Supplement