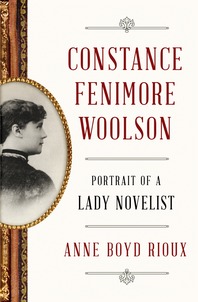 Constance Fenimore Woolson (1840–1894), who contributed to Henry James’s conception of his heroine Isabelle Archer of The Portrait of a Lady, was one of the most accomplished American writers of the nineteenth century. The best known (and most misunderstood) facts of her life are her relationship with James and her suicide in Venice. Uncovering new sources, Anne Boyd Rioux provides a fuller picture of Woolson’s life, her fight against depression, her sources for her writing and her capacity for love and joy.

As an expatriate in Europe, Woolson explored women’s thwarted ambitions while challenging the foremost male writers of her era. Rioux reveals an exceptional artist who pursued and received serious recognition despite the stigma attached to female authors.

“Rioux vividly evokes Woolson’s struggles to choose independence and a writer’s life over domesticity, and gives a convincing reappraisal of her work.” — Ten books to read in February, BBC Culture

“... Rioux’s book makes a strong case for reassessing this contemporary and close friend of Henry James (and “contributor to his conception” of his heroine Isabel Archer) whose work presages Edith Wharton...” — Times Higher Education

“Rioux is strong on the context of Woolson’s writing and this book is an excellent guide to her work.” — The Daily Telegraph