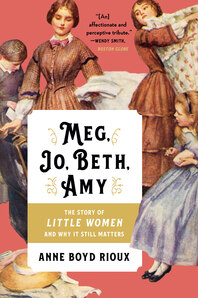 Rediscover the beloved classic Little Women and its lasting power as it celebrates its 150th anniversary.

Soon after its publication on 30 September 1868, Little Women became an enormous international bestseller. When Anne Boyd Rioux read it in her twenties, it had a powerful effect on her and through teaching it, she has seen its effect on many others. In Meg, Jo, Beth, Amy, she recounts Louisa May Alcott’s inspiration for the book and examines why this tale set in the American Civil War has resonated through time.

Alcott’s novel has moved generations of women, amongst them writers such as Simone de Beauvoir, J.K. Rowling, Cynthia Ozick and Ursula K. Le Guin. Rioux sees the novel’s beating heart in its portrayal of family resilience and its look at the struggles of girls growing into women. In gauging its current status, she shows why it remains a book with such power that people carry its characters and spirit throughout their lives.

“Anne Boyd Rioux's book, published to coincide with Little Women's 150th anniversary, is a compact but rich account of Alcott's life, how she came to write her most famous and enduring work, and its effect on her and American literature... [a] satisfying, balanced but punchy tribute to Alcott's great work...” — Lucy Mangan, The Spectator

“Highly entertaining and eminently sane…[Rioux] paints a compelling portrait of Alcott, giving us fascinating insights into the creation of Little Women.” — Charlotte Gordon, The Washington Post

“Rioux gives an enthralling account of how Little Women broke new ground – with realistic girls who spoke in ‘vulgar’ slang, lost their tempers, had career plans and, if they did get married, found it pretty hard work... This delightful read had me leaping to grab Little Women and its two sequels off the bookshelf immediately.” — The Mail on Sunday

“Lively and informative…Meg, Jo, Beth, Amy does what—ideally—books about books can do: I’ve taken Little Women down from my shelf and put it on top of the books I plan to read.” — Francine Prose, The New York Times Book Review

“Thoughtful… An adroit consideration of Alcott and her milieu.” — Meghan Cox Gurdon, The Wall Street Journal

“Rioux considers the cultural impact and enduring popularity of Louisa May Alcott’s American Civil War-set novel Little Women, a runaway success since it was first published 150 years ago.” — The top page-turners of 2018: History, Mail on Sunday

“... Rioux does a fine job of accessibly summing up the appeal of a popular classic.” — The Herald