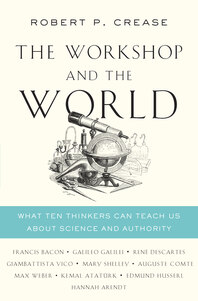 A fascinating look at key thinkers throughout history who have shaped public perception of science and the role of authority.

Robert P. Crease looks at questions about when a scientific discovery becomes accepted fact, who decides this and how citizens should interact with the scientific process. He answers by introducing the world’s greatest thinkers and explaining how they shaped scientific progress.

At a time when the Catholic Church assumed total authority, Bacon, Galileo and Descartes were the first to articulate the idea of scientific expertise, while writers such as Shelley and Comte questioned the scientific process. Centuries later, scholars such as Atatürk and Arendt examined the relationship between the scientific community and the public—especially in times of distrust in experts. An exploration of what it means to practise science for the common good and who can question expertise, this book will help readers understand how we reached the current moment of anti-science rhetoric and what we can do about it.