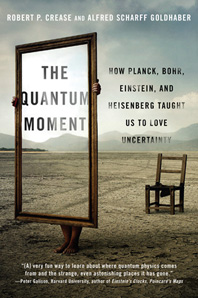 The fascinating story of how quantum mechanics went mainstream.

Time travel, parallel worlds, random behaviour: the language and the imagery of quantum mechanics are ubiquitous, yet the science—and its journey into everyday language—still confounds us. Robert P. Crease and Alfred Scharff Goldhaber tell how a controversial idea from an obscure branch of optics grew in complexity and authority, eventually dominating the scientific community and commanding the attention of the culture at large. Recounting fiery disputes between figures including Einstein, Schrödinger and Pauli, the authors trace popular images back to their scientific roots and uncover modern manifestations in everything from architecture and sculpture to the prose of John Updike. The Quantum Moment combines an exhilarating history of the quantum with shrewd insight into our experience of the everyday.

“While examining and celebrating the interplay between the sciences and humanities, Crease and Goldhaber do a first-rate job of explaining what quantum theory is all about…” — Prospect

“The general level of cultural commentary is more thoughtful and will engage and perhaps even challenge the attitude of scientists as well as philosophers and cultural critics.” — Times Higher Education