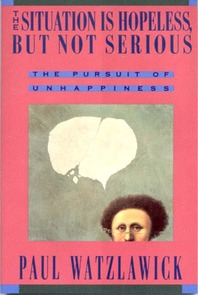 Calling upon metaphors, vignettes, jokes, innuendos, and certain other "right-hemispheric" language games, Paul Watzlawick shows how we can (and do) make everyday life miserable.


Do you see the past through a rosy filter that makes it seem like Paradise Lost? Are you convinced that traffic lights always turn red for you? Do you have to win (so as not to lose)? After extricating yourself from a bad relationship, do you find another partner just like the previous one? If so, congratulations! You have the makings of an unhappiness expert. With the techniques in this book, you can raise yourself to the genius level. A word of warning, however. Along the way you may begin to ask yourself, "How did I manage to turn myself into my own worst enemy?" Fortunately, this tongue-in-cheek (but serious) volume takes a look at that question too.

Special attention is given to such topics as "Four Games with the Past," "Self-fulfilling Prophecies," and "Why Would Anybody Love Me?" Those who believe that the search for happiness will eventually lead to happiness will find much to ponder in the section "Beware of Arriving."

All readers will be both amused and startled to find themselves in these pages, but there is a special delight and enlightenment for therapists and counselors. Although the author does not officially admit it, the book is one complex "symptom prescription," a therapeutic double bind as described and practiced by him and his colleagues.