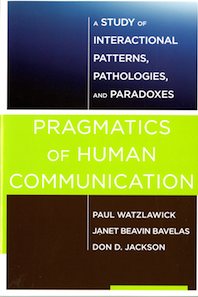 The properties and function of human communication.

Called “one of the best books ever about human communication,” and a perennial bestseller, Pragmatics of Human Communication has formed the foundation of much contemporary research into interpersonal communication, in addition to laying the groundwork for context-based approaches to psychotherapy. The authors present the simple but radical idea that problems in life often arise from issues of communication, rather than from deep psychological disorders, reinforcing their conceptual explorations with case studies and well-known literary examples. Written with humor and for a variety of readers, this book identifies simple properties and axioms of human communication and demonstrates how all communications are actually a function of their contexts.