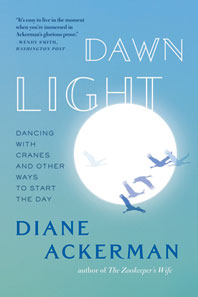 "It's easy to live in the moment when you're immersed in Ackerman's glorious prose." —Washington Post

In an eye-opening sequence of personal meditations through the cycle of seasons, one of our most celebrated storyteller-poet-naturalists awakens us to the world at dawn. Diane Ackerman draws from sources as diverse as meteorology, world religion, etymology, art history, and poetry in order to celebrate that moment in which the deepest arcades of life and matter become visible. From spring in Ithaca, New York, to winter in Palm Beach, Florida, Dawn Light is an impassioned call to revel in our numbered days on a turning earth.

“Diane Ackerman is one of our great literary voluptuaries…[T]he writing that results is as invigorating as a lungful of cool morning air.” — Gayle Brandeis, San Francisco Chronicle