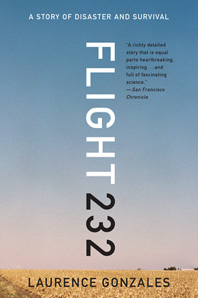 A dramatic and extraordinarily rare survivors' view of a major air crash, twenty-five years after the tragedy.

On 19 July 1989, while United Airlines flight 232 wallowed drunkenly northwest of the airport at Sioux City, Iowa, hundreds of fire and rescue workers waited. The plane slammed onto the runway, broke into pieces and burst into a fireball. The rescue workers did not move: nobody could survive that crash. And then people began walking out of the field lining the runway. Miraculously, 184 of 296 passengers lived—138, unhurt.

Laurence Gonzales, interviewed dozens of the survivors of Flight 232. He takes the reader through the detective work that found the fatal flaw in an exploded titanium fan disk. More powerful still is the heroism he found: pilots flying a plane with no controls; flight attendants keeping their calm in the face of certain death; passengers sacrificing themselves to save others.

“Gonzalez... delivers the goods in exhaustive, relentless fashion.” — The Times

“Flight 232 remains a deeply moving and compassionate work, one that really brings home the impact of disaster and survival on everyday lives. A book to be proud of.” — The Big Issue