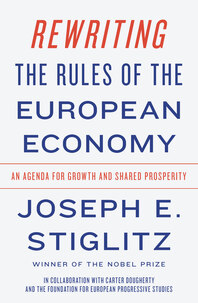 The problems of today’s Europe can be traced directly to the rewriting of the “rules of the economic game” that has taken place over several decades under the strong influence of neoliberalism. If Europe is to return to the innovative and dynamic economy it once had—and if there is to be shared prosperity, social solidarity and justice across Europe—the rules must be rewritten once again. With the Foundation for European Progressive Studies (FEPS), Joseph E. Stiglitz lays out comprehensive programmes and policies designed to relieve the suffering of Europeans and restore a prosperous and equitable European Union.

"Rewriting the Rules is a powerful statement from a group of influential writers from both sides of the Atlantic, led by one of the most eminent economists, a Nobel Prize winner and global activist. The ‘rules’ are in opposition to the once-dominant Washington Consensus, but what is most important is that they are gradually making their way into mainstream economics and policy-making. If this continues, then we can really hope to rewrite the rules both in Europe and maybe even in the USA." — Marek Belka, former prime minister of Poland and former president of the Polish National Bank