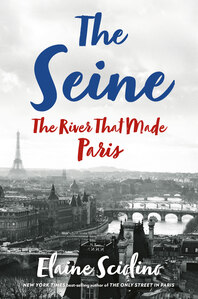 Notes from an author: Elaine Sciolino on Paris

A vibrant, intimate tour of the Seine.

In the spring of 1978, as a foreign correspondent in Paris, Elaine Sciolino was seduced by a river. In The Seine, she builds the story of the river through memoir, travelogue and history, writing a love letter to the city she has called home since 2002. Sciolino begins in Paris, then moves east to discover the river’s origins—both real and mythical—in Burgundy. She celebrates the river’s rich history and captures the charm of its lively characters: a bargewoman who worked on the river for decades, a bookseller along the riverbanks, a houseboat dweller and a famous cameraman who knows how to capture the river’s light. She patrols the Seine with river police, rows with a restorer of antique boats, discovers a champagne vineyard, and even dares to drink from and swim in the river. In this rich portrait, Sciolino explains why the Seine is the world’s most romantic river and invites readers to explore its secrets and magic for themselves.

"I learned so much from this book. Elaine Sciolino is a graceful, companionable writer, someone who speaks about France in the most enjoyably American way... [She] proceeds from colorful detail to revealing detail, gently informing even as she entertains... Sciolino has laid one more beautiful and amusing wreath on the altar of the City of Light." — Edmund White, The New York Times