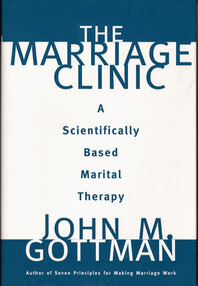 The Marriage Clinic presents a complete marital therapy program based on John Gottman's much heralded research on marital success and failure.

Here one will find not only a wide range of succinct and useful assessment procedures, but also a highly specific, research-based, and modularized treatment program. In addition, there are dozens of questionnaires and interview protocols to be used in both assessment and intervention.

In prospective, long-term research with over 700 couples, Gottman has discovered certain factors that distinguish happy, stable couples from both unstable, ultimately divorcing couples and stable but unhappy couples. These findings, which are explained here in understandable, nontechnical language, form the basis of his Sound Marital House theory of marriage, which guides the new therapy. This therapy has two goals: changing the marital friendship and teaching couples to regulate conflict.

Despite the high aims of much marital therapy, Gottman found that most marital conflicts involve fundamentally unresolvable relationship issues called "perpetual problems." He shows how therapists can help spouses move from gridlock to dialogue on these issues. Solvable problems can be resolved more easily when the couple has a strong marital friendship. He gives therapists the tools to teach spouses five fundamental skills to develop and strengthen their friendship: softened start-up, accepting influence, repair and de-escalation, compromise, and physiological soothing.

Gottman compares his clinic to a restaurant, where clients are offered a menu of treatment formats, from psychoeducation for specific issues to extended therapy to repair a badly damaged marital friendship. Therapists, too, can choose among the questionnaires and strategies for those that fit the needs of particular couples. Whatever their choice, they will find that their practice is greatly enriched by the scientifically-based offerings of The Marriage Clinic.

"There is an astonishing wealth of assessment tools…[T]horough and insightful." — Milton H. Erickson Foundation Newsletter

"If it isn't a classic already, it will be very soon…[R]efreshing, invigorating, and renewing" — Bulletin of the Menninger Clinic

"[A]n important addition to the field of couple therapy...the first time that a couple therapy is developed from marital research." — International Academy for Marital Spirituality Review

"John Gottman has done it again! The foremost researcher in the area of couple relationships has written another innovative germinal book on family relations, this time focused on therapeutic interventions for distressed couples. What distinguishes this book from other treatises on family therapy is that it is based not on clinical speculation but on scientific research findings from the hundreds of families intensively studied in Gottman's lab. This is one of the most important books on couple therapy ever written and is an essential addition to the library of every family therapist or family researcher." — E. Mavis Hetherington, PhD, James E. Page Professor of Psychology, University of Virginia

"With The Marriage Clinic, John Gottman, the Mozart of family research, has turned his enormous talents and skills to the task of creating a new, empirically based marital therapy. Unlike previous marital therapies, this one is based on 25 years of longitudinal research on real couples—distressed, happy, and in between. Written with clarity, humor, and erudition, The Marriage Clinic propels couple therapy into the 21st century with a solid scientific and clinical foundation. Read it and get on board." — William M. Pinsof, PhD, President, The Family Institute at Northwestern University

"This book reflects a wonderful blend of the highest quality research on marriage and practical, clear guidelines for an innovative approach to marital therapy. It reflects Dr. Gottman's unique accomplishments as a researcher, his keen ability to perceive the patterns of emotion and beliefs in marital couples, and his clear recognition of the limits of previous approaches to marital therapy." — David Reiss, MD, Vivian Gill Distinguished Research Professor, George Washington University Medical Center