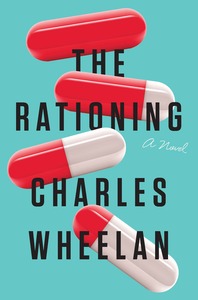 America is in trouble—at the mercy of a puzzling pathogen. That ordinarily wouldn’t lead to catastrophe, thanks to modern medicine, but there’s just one problem: the government supply of Dormigen, the silver bullet of pharmaceuticals, has been depleted just as demand begins to spike.

Set in the near future, The Rationing centers around a White House struggling to quell the crisis—and control the narrative. Working together, just barely, are a savvy but preoccupied president; a Speaker more interested in jockeying for position—and a potential presidential bid—than attending to the minutiae of disease control; a patriotic majority leader unable to differentiate a virus from a bacterium; a strategist with brilliant analytical abilities but abominable people skills; and, improbably, our narrator, a low-level scientist with the National Institutes of Health who happens to be the world’s leading expert in lurking viruses.

Little goes according to plan during the three weeks necessary to replenish the stocks of Dormigen. Some Americans will get the life-saving drug and others will not, and nations with their own supply soon offer aid—but for a price. China senses blood and a geopolitical victory, presenting a laundry list of demands that ranges from complete domination of the South China Sea to additional parking spaces at the UN, while India claims it can save the day for the U.S.

“A brilliant and bold novel. Get ready for twists and turns, exploring life and death decisions, and the intrigue, good and bad, of political leadership as the country searches to solve a pathogen crisis. This is an exciting and exhilarating read, and provides some needed lessons for our country today.” — Matthew Dowd, chief political analyst, ABC News

“[A] race-against-the-clock satire....Wheelan draws deeply on his intimate knowledge of the world of governance and politics to create his first novel, an eminently credible tale of a worst-case scenario that one hopes never comes to pass.” — Booklist