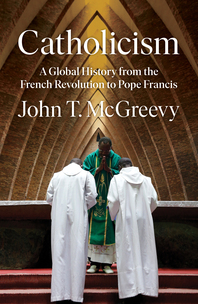 In dramatic stories and sweeping panoramas, distinguished historian John T. McGreevy tells the mesmerising story of a Church torn between the forces of reform and reaction for the past 250 years. Anti-monarchist French clerics celebrated the Revolution, but the murder of priests and destruction of churches in the Terror galvanised a powerful conservative reaction that reverberates to this day. Missionaries around the world greatly expanded the Church’s influence while bringing new tensions between a culturally diverse syncretism and the ultimate authority of Rome. The aspirations of the faithful for justice in this world—African Catholics fighting for independence, Latin Americans developing a theology of liberation, Polish and South Korean Catholics demanding democratic governments—challenged the politically cautious. The cataclysms of the Second World War, decolonisation, the Second Vatican Council and clerical sexual abuse have each remade the Church, leaving Pope Francis with the superhuman task of charting a path for over one billion Catholics worldwide.

"Through vivid portraits and nuanced analysis of Catholic traditionalists and reformers, McGreevy shows how persistent divisions within Catholicism have shaped as well as mirrored central conflicts in modern world history. Catholicism reveals why the Catholic church generates intense hatred and fierce loyalty, enraging conservatives by changing so much while frustrating progressives by changing so little. A landmark book." — James Kloppenberg, author of Toward Democracy

"In an epic about moral globalization since the French Revolution, John T. McGreevy narrates a quest for understanding and conversion, a tale of diasporas and missions. This is truly a majestic book." — Jeremy Adelman, coauthor of Worlds Together, Worlds Apart

"For those of us pained by how political divisions manipulate and distort Catholicism today, John T. McGreevy offers essential perspective and the mixed consolation that this is nothing new. His book unfolds an epic drama as power contends with democracy, authority with diversity, world with spirit." — Sister Helen Prejean, author of Dead Man Walking

"If you want to understand the world, don’t ignore the history of its most global institution. John T. McGreevy exposes the paradoxes of the Church: an institution surprisingly adaptable to different cultures, riven by faction, yet called to common action. With admirable candor, impartiality, elegance, and economy, he tells a story of failings and faith." — Felipe Fernández-Armesto, author of Out of Our Minds