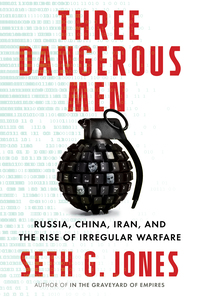 In Three Dangerous Men, defence expert Seth G. Jones profiles pioneers of irregular warfare in Moscow, Beijing and Tehran who adapted American techniques and made huge gains without waging traditional warfare. Drawing on interviews with dozens of US military, diplomatic and intelligence officials, such as CIA directors Michael Hayden and David Petraeus, the author demonstrates why the US abandoned its own irregular capabilities and is thus steadily losing ground to its global adversaries. Jones argues the US must significantly alter how it thinks about—and engages in—competition before it is too late.

"Seth Jones makes a compelling, riveting argument in Three Dangerous Men that the United States needs to reconsider significant aspects of the very concept of contemporary warfare. He provides a fascinating examination of the threats to the US from Russia, Iran, and China, describing how they are not just using traditional military capabilities to confront the United States, but hackers, spies, special operations forces, proxies, and private military companies – among others. This is a must read for anyone seeking to understand the present-day challenges facing the U.S. and our allies and partners around the world." — Gen. David Petraeus, US Army (Ret.), former Commander of the Surge in Iraq, U.S. Central Command, and Coalition Forces in Afghanistan, and former Director of the Central Intelligence Agency