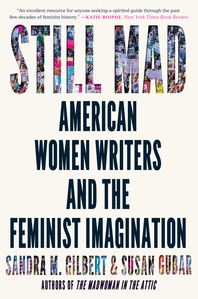 A brilliant, sweeping history of the contemporary women’s movement told through the lives and works of the literary women who shaped it

Forty years after their first ground breaking work of feminist literary theory, The Madwoman in the Attic, award-winning collaborators Sandra M. Gilbert and Susan Gubar map the literary history of feminism’s second wave. From its stirrings in the midcentury—when Sylvia Plath, Betty Friedan and Joan Didion found their voices and Diane di Prima, Lorraine Hansberry and Audre Lorde discovered community in rebellion—to a resurgence in the new millennium in the writings of Alison Bechdel, Claudia Rankine and N. K. Jemisin, Gilbert and Gubar trace the evolution of feminist literature.

They offer lucid, compassionate and piercing readings of major works by these writers and others, including Adrienne Rich, Ursula K. Le Guin, Maxine Hong Kingston, Susan Sontag, Gloria Anzaldúa and Toni Morrison. Activists and theorists like Nina Simone, Gloria Steinem, Andrea Dworkin, Eve Kosofsky Sedgwick and Judith Butler also populate these pages as Gilbert and Gubar examine the overlapping terrain of literature and politics in a comprehensive portrait of an expanding movement. As Gilbert and Gubar chart feminist gains—including creative new forms of protests and changing attitudes toward gender and sexuality—they show how the legacies of second wave feminists and the misogynistic culture they fought, extend to the present. In doing so, they celebrate the diversity and urgency of women who have turned passionate rage into powerful writing.

"They’ve done it again!... Make space on your bookshelf for this lively and indispensable volume." — Elaine Showalter, professor emerita of English, Princeton University

"Still Mad is clever, playful and full of memorable turns of phrase… and its combination of ideas, clear prose and enthralling stories will make it an important text not only for literary scholars and historians but also for the general reader." — Martha Rampton, Literary Review