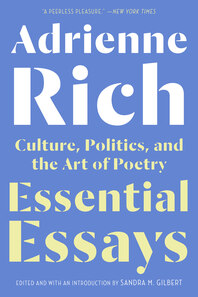 The Essential Essays gathers twenty-five of Adrienne Rich’s most renowned essays, demonstrating the lasting brilliance of her voice and her prophetic vision. Her thoughts on feminism, poetry, race, homosexuality and identity are still powerful and relevant today. Discussing everything from her fearless poetic vision to her revolutionary views on social justice, Rich’s essays unite the political, personal and poetical.

Included are Rich’s landmark essays “Motherhood as Experience and Institution”; “What Is Found There”; “Why I Refused the National Medal for the Arts” and “Compulsory Heterosexuality and the Lesbian Existence”. As Sandra Gilbert writes, “To re-read and to re-think Rich’s prose as a complete oeuvre is to encounter a major public intellectual...”

“I once read that a blue whale’s arteries are so large that an adult human could swim through them. That’s what entering these essays feels like — to flow along with the pulses of Rich’s intelligence, to be enveloped by her capacious heart and mind.” — International New York Times

“Rich urges us to stand up, look around and question outdated politics in a startlingly modern flourish. These essays are aptly named; they are indeed essential.” — The Irish Times