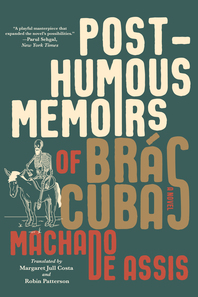 A Playful Masterpiece That Expanded the Novel’s Possibilities

"I passed away at two o’clock in the afternoon on a Friday in August in 1869, in my beautiful mansion in the Catumbi district of the city." So begins Posthumous Memoirs of Brás Cubas—at the end of the narrator’s life. Published in 1881, this highly experimental novel was not at first considered Machado de Assis’ definitive work—a fact his narrator anticipated, bidding "good riddance" to the critic looking for a "run-of-the-mill-novel". Yet in this coruscating new translation, Margaret Jull Costa and Robin Patterson reveal a pivotal moment in Machado’s career, as his flights of the surreal became his literary hallmark. An enigmatic, amusing and frequently insufferable anti hero, Brás Cubas describes his Rio de Janeiro childhood spent tormenting household slaves, his bachelor years of torrid affairs and his final days obsessing over nonsensical poultices. A novel that helped launch modernist fiction, Brás Cubas shines a direct light to Ulysses and Love in the Time of Cholera.

"The most modern, most startlingly avant-garde novel I read this year was originally published in 1881. Jull Costa and Patterson offer a peerless translation of this comic masterpiece, narrated from beyond the grave by a feckless, pretentious, impossibly winning aristocrat. The Brazilian novelist Machado was besotted with the license afforded by fiction and the social critique permitted only by comedy. Read this witty, wildly inventive work and how conservative, how painfully corseted so much modern fiction will suddenly seem." — Parul Sehgal, 'Times Critics' Top Books of 2020', The New York Times

"One of the wittiest, most playful, and therefore most alive and ageless books ever written." — Dave Eggers

"The book’s invigorating style, as much as its backdrop of racial and social injustice, makes it ideal reading for this morbid, insurgent summer... Sprinkled with epigrams, dreams, gags and asides, the story teases, dances and delights... [Machado']s worldly, bruised voice reaches out to touch readers today with its rueful comedy and wry sensuality." — The Economist

"A great ironist, a tragic comedian... In [De Assis] books, in their most comic moments, he underlines the suffering by making us laugh." — Philip Roth

"The greatest writer ever produced in Latin America." — Susan Sontag