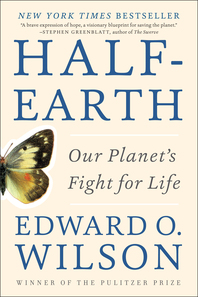 History is not a prerogative of the human species, Edward O. Wilson declares in Half-Earth. Demonstrating that we blindly ignore the histories of millions of other species, Wilson warns us that a point of no return is imminent. Refusing to believe that our extinction is predetermined, Wilson has written Half-Earth as a cri de coeur, proposing that the only solution to our impending “Sixth Extinction” is to increase the area of natural reserves to half the surface of the earth. Half-Earth is a resounding conclusion to the best-selling trilogy begun by the “splendid” (Financial Times) The Social Conquest of Earth (ISBN 978 0 87140 363 6) and “engaging and highly readable” (Times Higher Education) The Meaning of Human Existence (ISBN 978 0 87140 100 7).

"As an outline of our terrible ecological plight, it [Half-Earth] does a first-class job. Wilson is, if nothing else, a gifted wordsmith and Half-Earth is a much-needed antidote to the views of those who assert that our worldly woes are exaggerated and that everything is tickety-boo in the Garden of Eden." — The Observer

"... in his new, important work Half-Earth... Wilson's gauntlet has been thrown: let the revolution begin." — Geographical

"It's time to make protecting the biodiversity of our planet the next great cause of planetary health. If one text could ignite this movement for biodiversity, it might be E 0 Wilson's book, Half-Earth: Our Planet's Fight for Life." — The Lancet