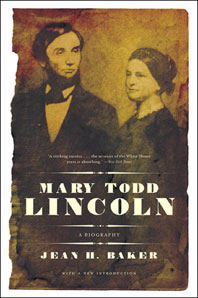 "A striking success…the account of the White House years is absorbing, the account of Mary Lincoln's life as a widow utterly compelling." —New York Times

This definitive biography of Mary Todd Lincoln beautifully conveys her tumultuous life and times. A privileged daughter of the proud clan that founded Lexington, Kentucky, Mary fell into a stormy romance with the raw Illinois attorney Abraham Lincoln. For twenty-five years the Lincolns forged opposing temperaments into a tolerant, loving marriage. Even as the nation suffered secession and civil war, Mary experienced the tragedies of losing three of her four children and then her husband. An insanity trial orchestrated by her surviving son led to her confinement in an asylum. Mary Todd Lincoln is still often portrayed in one dimension, as the stereotype of the best-hated faults of all women. Here her life is restored for us whole.

“Beautifully crafted, entertaining as only the best biographies can be, and rich with superb insights and wonderful anecdotes about nineteenth-century family and domestic life, [this] is a complex and moving character study of a woman tragically out of step with her time and place.” — Chicago Tribune

“This exciting and important book is a major contribution to Lincolniana. Absorbing and convincing, this is one of the few books that deserve to be called definitive.” — David Herbert Donald, author of Lincoln

“In the thriving cottage industry of Lincoln studies Baker’s readable and sympathetic biography is easily the definitive account of the troubled former First Lady. Baker’s principal contribution is in recognizing Mary Todd Lincoln on her own terms.” — Library Journal