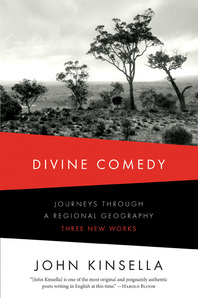 “One of the most original and poignantly authentic poets writing in English.”—Harold Bloom

A three-part, epic work challenging our notions about the environment by Australia’s preeminent poet of the natural world. Consisting of Purgatorio: Up Close, Paradiso: Rupture, and Inferno: Leisure Centre, John Kinsella's "distractions" on Dante's Divine Comedy journey through time and space. Set in a wheat-belt Western Australia, these poems are a phantasmagoria of the real and imagined, depicting nature in its full regalia, resisting forces of environmental damage and human indifference.

“In this brilliant and complex ecological ‘comedy,’ where each day, indeed each moment, marks a new struggle in the survival of the fittest on our planet, John Kinsella has produced a multilayered poem of great daring, imagination, and originality. . . . An astonishing accomplishment.” — Marjorie Perloff, author of 21st-Century Modernism