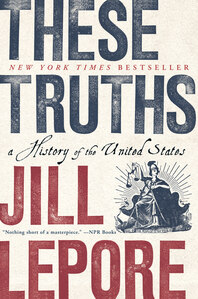 In the most ambitious one-volume American history in decades, award-winning historian Jill Lepore offers a magisterial account of the origins and rise of a divided nation.

The American experiment rests on three ideas—“these truths”, Jefferson called them—political equality, natural rights and the sovereignty of the people. And it rests, too, “on a dedication to inquiry, fearless and unflinching”, writes Jill Lepore in a ground-breaking investigation into the American past that places truth at the centre of the nation’s history.

Telling the story of America, beginning in 1492, These Truths asks whether the course of events has proven the nation’s founding truths or belied them. Finding meaning in contradiction, Lepore weaves American history into a tapestry of faith and hope, of peril and prosperity, of technological progress and moral anguish. This spellbinding chronicle offers an authoritative new history of a great, and greatly troubled, nation.

“The history of the American South is one of change, power struggle, political bending from Left to Right, negotiating race, and all of this cannot be contained in one volume or by one narrative that at times feels too neat — even if Lepore is a truly gifted writer with profound insight into those she writes about. Do read her magnificent book, but just remember that it's not the whole story.” — The Spectator

“These Truths is a crucial work for presenting a fresh and clear-sighted narrative of the entire story, Columbus soup to Trump nuts, of what is at present a most terribly troubled nation... There have been more than a few moments in the last two centuries, moments racked by crisis and scandal, incompetence and insurgency, which have competed to test that capability. All of them, from the Trail of Tears to the Twin Towers, from White Power to Watergate, appear, exciting and page-turningly fascinating, in one of those rare history books that can be read with pleasure for its sheer narrative energy.” — Simon Winchester, New Statesman

“… clear-eyed history of the country. The feat of compression is rarely attempted, still less in one volume, and Ms Lepore brings a refreshingly modern eye to a daunting task.” — The Economist

“This vivid history brings alive the contradictions and hypocrisies of the land of the free... excellent book.” — David Aaronovitch, The Times

“... extraordinary book.” — On my Radar: Anand Giridharadas, The Guardian

“By emphasising founding fathers and presidents, and charismatic leaders on both sides of the political divide, [Jill Lepore] makes history vivid.” — Ten books to read in September, BBC Culture

“[Lepore’s] one-volume history is elegant, readable, sobering; it extends a steadying hand when a breakneck news cycle lurches from one event to another, confounding minds and churning stomachs.” — Jennifer Szalai, The New York Times

“This sweeping, sobering account of the American past is a story not of relentless progress but of conflict and contradiction, with crosscurrents of reason and faith, black and white, immigrant and native, industry and agriculture rippling through a narrative that is far from completion.” — Editor's Choice, The New York Times Book Review

“Jill Lepore's sweeping nonfiction narrative of America doesn't just chronicle our history; it rewrites it, illuminating the direct line between the country's past and polarized present.” — Newsweek International

“I love Lepore’s writing in The New Yorker, and the book is pitched as a major standard history of the US. That made it irresistible.” — Winter Reads 2018-19: the best books of the season, Times Higher Education

“An old-fashioned civics book,’ Harvard historian and New Yorker contributor Jill Lepore calls it, a glint in her eye. This fat, ludicrously ambitious one-volume history is a lot more than that. In its spirit of inquiry, in its eager iconoclasms, These Truths enacts the founding ideals of the country it describes.” — The Huffington Post

“Lepore guides us through the infernos of the Revolution, the civil rights movement and 9/11 with the judgement and wisdom of Dante's Virgil... A declaration of how bold and daring and difficult the American experiment continues to be, These Truths is a colossus of a book which looks down on Trump's America with the authority of Mount Rushmore.” — The Oldie

“I’m ending the year back in the real world though, reading the most fabulously written history of the USA called These Truths by Jill Lepore. She’s devastating on the role played by Britain’s enthusiasm for slavery in the founding of the land of ‘liberty’.” — Armando Iannucci, 2018's best books, The Big Issue

“This is a tale told with the verve of a great teacher, the modulated literary style of a high-class novelist and the generous, careful eye of a historian who treats her sources as precious artefacts not as subjects for plunder. Who else but Lepore, whose essays for the New Yorker are breathtakingly well-observed, would introduce Tom Paine as 'the spitfire son of an English grocer' or Huey Long as 'wild-eyed and fist-stamping'?” — History Today

“This is a history for the 21st century, far more inclusive than the standard histories of the past.” — The Guardian

“These Truths is a history of the United States from soup (Columbus) to nuts (Donald Trump). It is clear in purpose and elegant in design...” — Times Literary Supplement

“This 800-page history of the United States is described by Gates as “the most honest and unflinching account of the American story I’ve ever read.” Unlike other historians in the genre, Lepore wields diverse viewpoints to expose all of our country’s deep contradictions. This book fills in all the tidbits of U.S. history not taught in school.” — Bill Gates’ 5 Favorite Books Of 2019, Forbes

“... Jill Lepore’s These Truths may restore faith in American ideals. She quotes Lincoln: “We must disenthrall ourselves, and then we shall save the country.”” — From Trump to These Truths: what to read to make sense of politics in 2019, The Guardian

“Telling the entire story of a nation isn't easy, but it's something that this massive, magisterial history pulls off with aplomb... Studded with thoughts on everything from technology to the media, it's a remarkable feat.” — This Month's Best Historical Reads, History Revealed